Save 25% on Kimberly Einmo add-ons for EQ! 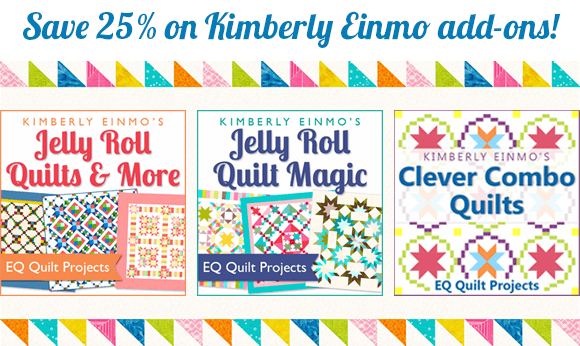 Offer only applies to Kimberly Einmo add-ons at ElectricQuilt.com.
Requires EQ8 or EQ7 software. These products are downloadable add-ons for EQ software. Downloads are not available for EU and UK customers.

Apply code QUILTS in cart. Cannot be combined with any other offer.
Sale ends February 9, 2023 at midnight, ET. All prices are in U.S. Dollars (USD).

Offers do not apply to online and in-person EQ8 classes.

Pearl has been sewing since she was 6 years old, starting with embroidery. She received her first real sewing machine at the age of 12, and she replaced the machine’s motor three times before she turned 16! Pearl spent many years making clothing, dolls and crafts.

P3 Designs Pattern Company was established in 1995 and Pearl has been publishing designs since then. Because of her love for appliqué, and wanting to share her methods with others, Pearl filmed her first video “Appliqué with Pearl”, which was succeeded by her new video “Appliqué Techniques with Pearl P. Pereira”. Additionally, she manufactures and sells her own appliqué products, i.e., Appliqué & Pressing Tool and Ultimate Appliqué Template Paper. She hope that these products and her patterns will inspire others to try hand appliqué — it can be easier than it looks.